So, here I am – Montréal, and what a fascinating place it is.


Performing in the Montréal Fringe Festival this year, I am based in a neighborhood called the Plateau. It is the very French (trés français) section of the city. I feel like I am in Europe…without the hassle of a trans-Atlantic flight. The city, for the most part is friendly, though I have encountered the notorious French condescension once or twice, but it’s all good and kind of amusing when it happens-It’s the exception right now. The people are open, and lovely. The city itself, at least the neighborhood in which I’m based, is kinda cruddy, but in this oddly cool way. While it is clear that the city has not been impervious to the global recession, there is still a vibrance and energy that makes me smile. Very safe. The architecture of the homes is fascinating. Mostly, because there seems to be no consistent style. In other cities I’ve been to, there is an overall style that one can discern. And while within a city the different neighborhoods have a variance of style, there is still the sense that you are in the same city. Not here. Moreover, it’s is not even a block-to-block thing, nor a neighborhood thing. You will walk down a street and see a building that looks like it was transplanted from the French Quarter in New Orleans, and right next to it, there is a row of townhouses that should be in London, then Baltimore, New York, San Francisco, Paris….I love it! 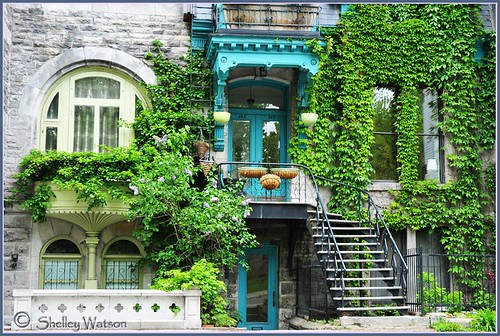 While walking through the streets (of The Plateau) one hear’s French being spoken, everywhere. I’ve been enjoying the outside markets of Avenue du Mont-Royal. Think of it as a French version of Promenade in Santa Monica (for the LA folks tuning in) with a view of the Parc Olympique in the distance. That sight is a flash-back for me. I’m not going to speak the number of how many years ago it was that I was visiting that landmark; but it was a lifetime ago-a reminder of how much has changed since I last saw it.


Of course, I feel like an ignorant “Ugly American” as I do not understand much  of the language….if at all. I find myself saying “Je ne comprende pas,” “Je regrette, ” and “Anglais? si vous plait?”  quite a bit….disgusting. Ms. Shaw, are you out there? (my high school French teacher),
“Je m’excuse!”


As far as our opening of Small Talk, by Eric Fallen:


We had a little over 20 people (more than I expected, really) and they were a pretty quiet bunch. HOWEVER, afterwards, the feedback was pretty outstanding. Many compliments, comment-cards were all raves. So, there that is. A friend of the playwright’s (she happened to be sitting right next to him, btw) confessed she was withholding laughter because she wasn’t aware that it was OK to laugh. One would think he would have given the “all-clear” to let loose with the chuckles, but apparently not. Weird…Regardless, Eric was very happy. The only thing missing was the presence of Eric Michael Gillett, our director. He had a performance in NYC last night that prevented his being able to attend, so he had a valid excuse.
Hope it was fantastic, Eric!

Personally, the evening felt more like a dress-rehearsal. It was the first time we were able to  put it ALL together for the first time – a minor missed move here, a rushed light cue there, nothing anyone who didn’t know otherwise would notice. Despite that, it seemed to be a success.
I look forward to being able to settle in a little more, I know I’m capable of much more. “Behind the Wheel” (the last piece that I am in) seemed to go over very well.

It’ll be interesting to see how the rest of the run/this Canadienne adventure goes.


Will be keeping you posted….