What a couple of weeks it’s been!


Savor the serenity folks, bask in your victories, be grateful for all you have….
because you never know when you find your life blind-sided by an out of control Buick Century slamming into a telephone pole, killing your uncle and almost claiming your father. 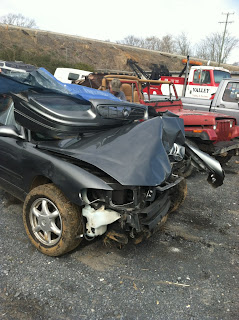 The harsh truth is my uncle would very likely still be alive, nor would my father have suffered the injuries he sustained, had they both been wearing a seat-belt. Quite frankly, it was (is) a miracle he survived at all.
It was a mess: They were on a road trip they had no real reason to be on. The accident occurred in rural Virginia. So in a sense, they were stranded in a local hospital for days. My father’s broken femur and hip went undiagnosed during their stay there.
blah, blah, blah….a week later and after a helluva long ambulance ride, my father is now in our local hospital, recovering after having his leg set, hip replaced (again!), and nose set (oh, yea – he pretty much broke his face, causing his nose to be displaced – so that had to be moved back-FUN!).
After two weeks! My father is finally on the path to recovery.
I am tremendously grateful…
Kinda puts things in perspective…